GHANA – The Savana Agriculture Research Institute of the Council for Scientific and Industrial Research CSIR-SARI in partnership with the African Agricultural Technology Foundation have sensitized more than 50 farmers in Ghana’s Manga region on the Genetically Modified (GM) Cowpea variety.

The farmers mostly women were drawn from Bawku and its adjoining districts. The field day exercise was to afford the farmers the opportunity to familiarize themselves and to know what GMO is all about contrary to some popular public perception that it is harmful and how profitable its cultivation can be.

Speaking in an interview with ModernGhana News on the side-lines of the field day at Manga, the Principal Investigator on the Pod Borer Resistant (PBR) Cowpea project Dr Jerry Nboyine, of CSIR-SARI indicated that, Cowpea production is greatly affected by the insect pests, especially the legume pod borer.

Pod borer causes the largest pre-harvest damages, reducing grain yield by up to 80% and lowering the quality of the grain. Dr Nboyine informed that it was against this backdrop that African scientists have identified PBR Cowpea (Bt cowpea), with in-built protection against Maruca also known as pod borer damage, to help farmers boost production for food security.

He stated that the new technology which involves the introduction of a character from a fungus called Bacillus thurigiensis (Bt) into the cowpea plant to enable it to withstand pod borer pest while reducing the cost of production of cowpea and quantity of insecticides applied on the farm.

Dr Nboyine called for a shift from the politics of GMO technology that has been adopted by developed countries for more than two decades. He observed that the country has over the years had a deficit in cowpea production and heavily depend on imports from neighbouring Nigeria, Niger and Burkina Faso who have adopted the technology in their production.

Gloria Adazaberah, a Plant Breeder with the Nyankpala station of CSIR-SARI urged people to engage the institute so as to be abreast with modern trends in agriculture.

The farmers appealed to the government to help make the seed available by adding it to the Planting for Food and Jobs Programme.

Another training in Atebubu-Amanten municipality

The institute also conducted a similar training in the Atebubu-Amanten municipality where they trained over 170 small scale famers in a one-day training organized by the Open Forum on Agricultural Biodiversity (OFAB).

DR Richard Ampadu-Ameyaw Senior Scientist at CSIR and National Coordinator for OFAB-Ghana hinted that nearly 200 million people in Africa consume the crop, despite its economic importance, cowpea yields on farmers’ fields were low. 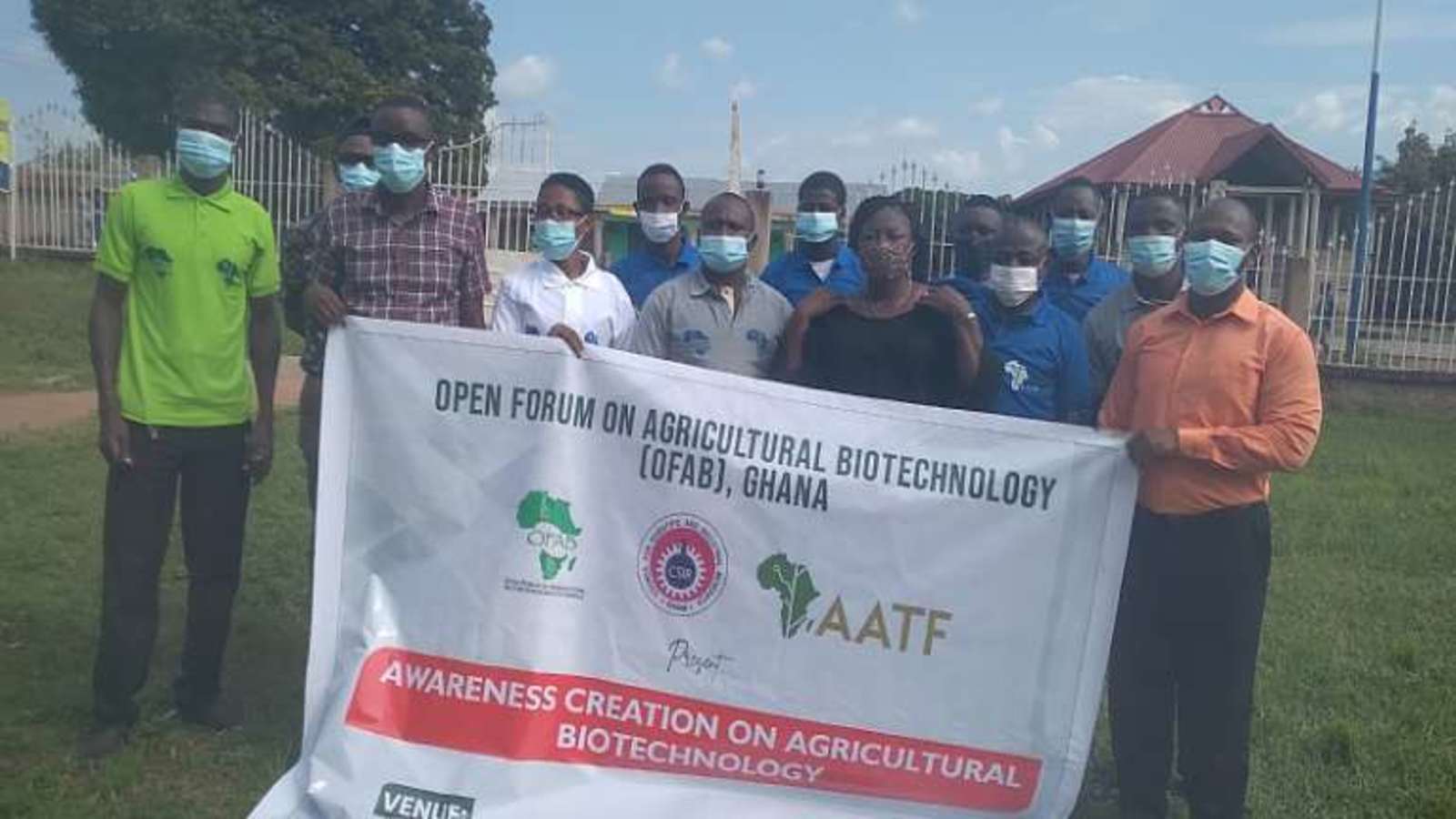 He encourage farmers to embrace the genetic modification, biodiversity, and sovereignty of food crops.

Dr Ampadu-Ameyaw explained that the increase of human populations is anticipated to about nine billion by 2050 and the use of chemicals on crops in the fields had raised serious concerns about the need to protect humans, environment and all its biodiversity.

He urged the farmers to consider the cultivation of GM seeds as they were sure to increase crop yields, reduce cost for production, needs for pesticide, enhance nutrients composition and food qualities.

“The GMO seeds would again boost the resistance to pest and diseases, promote foods security and reduction of poverty and tolerance for minerals and other climate stressors,” he added.

The Municipal Director of Agriculture, Mr Stephen Aidoo Atebubu-Amanten, noted that the agriculture department was committed to supporting farmers with modern agricultural services through well trained agricultural extension officers in the area. He implored them to form groups in order to command a collective voice.