U.S – While most people wouldn’t think twice about discarding the liquid contained in cans of chickpeas, two graduates from the Department of Food Science and Technology at the University of California Davis (UC Davis), have used it to create an innovative frozen dessert that is free of dairy, nuts and soy.

UC Davis alums, Katrina Fernandez and Josh Bjurman, who both graduated in 2020 with degrees in food science, have helped devise a (US major) allergen-free product they call ‘Faba’. This is an ice cream made from aquafaba – the liquid contained in cans of chickpeas.

Fernandez and Bjurman are upcycling the liquid which is  said to be packed with carbohydrates and protein.

When the aquafaba is whipped, the proteins trap air and form a light, fluffy foam that looks just like a meringue and can be used as a vegan alternative to egg whites and now as a base for ice cream.

“Allergens like milk, nuts and coconut are often found in many vegan desserts, and people who are unable to consume those types of allergens don’t really have any options available. We wanted to fill that gap in the market,” Bjurman said.

The duo explained that the idea was inspired by a local mum whose son is allergic to dairy, tree nuts and soy, but who couldn’t find anything “delicious” and safe on the market.

“That got us thinking that we can do something. We can make people’s lives better by giving them tasty food that doesn’t hurt them,” said Bjurman.

While developing the ice cream, Fernandez, Bjurman and a few of their fellow alumni, learned that by adding natural ingredients like citric acid, sugar, vanilla and additional chickpea protein to the whipped aquafaba, they could stabilize the mixture and prevent the ice cream from collapsing back into its liquid form.

Fernandez said during the experiment phase, they had to purchase a lot of cans of chickpeas.

“Early on, we were buying 10 plus cans of chickpeas at Trader Joe’s in one grocery trip. The workers would ask, ‘Are you making a lot of hummus?’ and we’d say, ‘No, we’re making ice cream,” she said.

Later, they partnered with local restaurants which gave them unused aquafaba that would otherwise be poured down the drain. The ice cream creators were happy that turning the waste product into a valuable, repurposed ingredient, helped prevent food waste.

The group has now partnered with several local restaurants and created a few different flavours, including traditional favourites like vanilla and mint chip, as well as more unique offerings such as brown sugar milk tea and cereal milk.

“For us, our dream is to get this product in grocery stores and to offer an additional resource for people who need it,” Fernandez said.

Aquafaba ice cream is airier and not as dense as traditional dairy ice cream with a texture comparable to gelato. 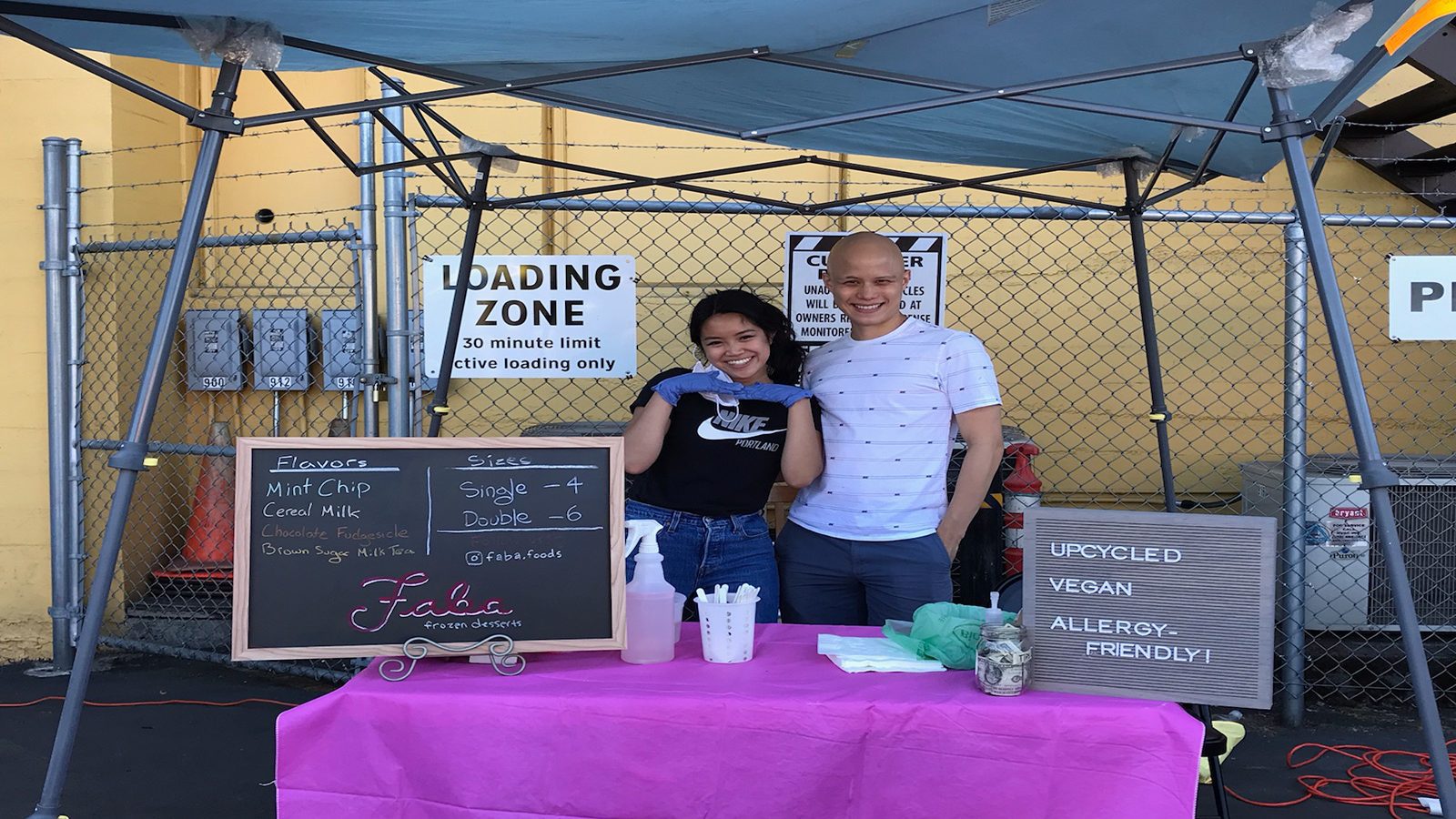 “Within the food science world, that competition is a pretty big deal because it’s so rigorous. Not only are you formulating the product, but you’re thinking about a food engineering plan and a marketing plan, so it’s a very holistic view of bringing a new product to market,” Fernandez said.

In 2020, they were accepted into the PLASMA startup accelerator program at UC Davis and were announced the runners-up in the “top company” category during a demonstration.

Last year, Fernandez and Bjurman officially filed Faba as a limited liability company. They produce small batches to sell at small events in the Portland, Oregon area where they now live with a hope to someday produce on a larger scale so even more people can enjoy the frozen treat.